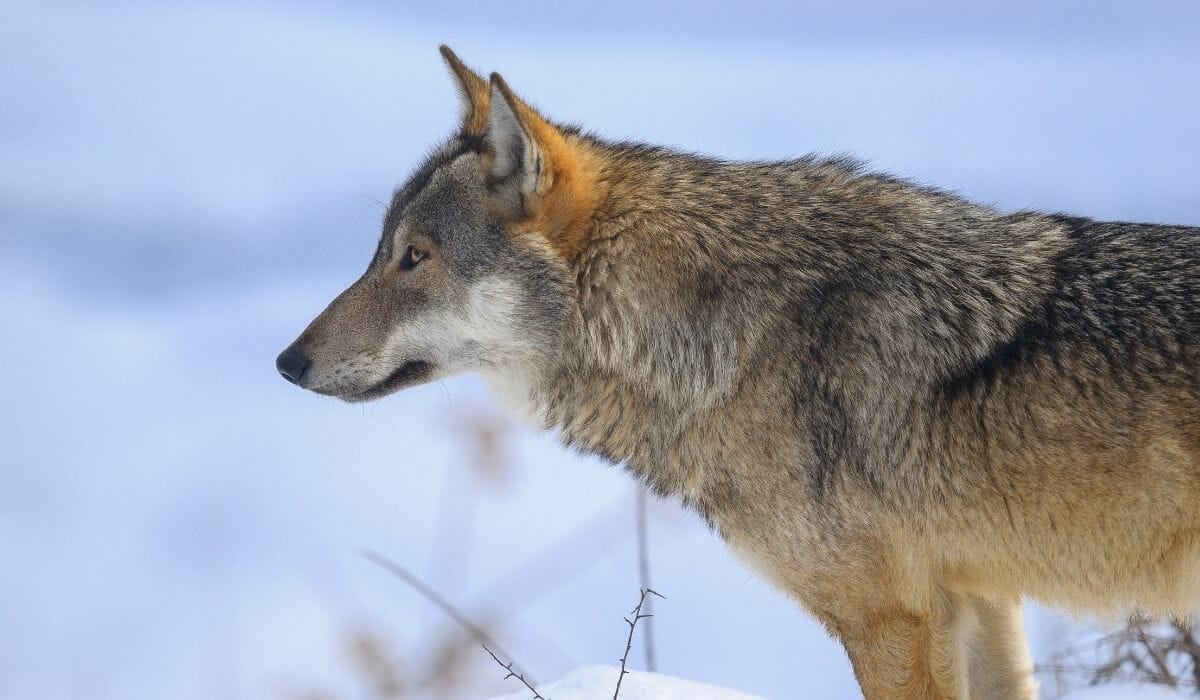 There is actually no official national animal of Italy. But, there is one that Italians from the north to the south would identify as their symbolic animal.

Introducing the Grey Wolf, also known as the Apennine Wolf. Found in the northern mountain ranges of Italy, and also in neighbouring Switzerland, this animal has become the country’s mascot and one of the national symbols of Italy.

What Is The National Animal Of Italy?

The Grey Wolf – officially known as the Canis lupus italicus – is found in the north of Italy in the Apennine Mountains.

Their numbers are estimated to be around 2000 – and are increasing across the region and into France thanks to it’s protected status.

It is the most prolific wild animal in Italy and has become known as one of those Italian symbols linked to the national identity. As we will learn, it is also an important element in Italian folklore.

The Short History Behind the National Animal Of Italy

In the early part of the 20th century, Italian researcher Giusieppe Altobello found that the animal now known as the Italian wolf varied from that of the generic wolf breed found in Europe.

His claims were dismissed, and only in 2002 were they validated. So, the Italian wolf is a unique breed.

It weighs up to 35 kgs on average, and tends to live in a pair or a small group of up to 7kgs.

Experience Free Guide of Rome on Your Mobile Today

Still Wondering Why Is the Italian Wolf the National Animal of Italy?

You may be wondering just why this spectacular grey wolf has become the national animal of Italy?

Well, it is not just because of its geographical spread throughout the country, or the fact that an Italian zoologist identified the subspecies. It’s because of the time old story of Romulus and Remus, who you may remember from our Capitoline Museum Guide.

The Tale of Romulus, Remus and the Wolf – National Animal of Rome

Legend states that Rome was founded in 753 BC by Romulus and Remus.

The twins had been abandoned at birth as they were seen to be a threat to King Amulius, and were suckeled by a she-wolf during their upbringing.

As such, the story of the foundation of Rome by the twins is a key part of the Roman – and hence the Italian – psyche. This is also why the wolf is regarded as the national animal of Rome.

Are Italians Proud of Their National Animal Symbol?

Given the cultural history – even if the story of Romulus and Remus actually predates the founding of Rome (but shhhhh, it doesn't really matter) many Italians carry a special place for the Italian wolf in their hearts.

Maybe not so much pride as in their food culture or wine production, but still the Italian Wolf is recognised across the country as an important animal symbol.

Other Important Symbols In Italy

The Italian wolf is the national animal emblem of Italy.

Let’s explore some of the other important symbols that carry significant meaning in Italian culture.

The National Flower of Italy

The national flower of Italy is the lily. It may not be something that everyone in the country knows, but it is actually pretty symbolic.

As we know, Italians have immense pride in their country, customs, and traditions. And the lily symbolises all of those things. Patriotism, love, purity, and beauty are all represented by the lily.

The lily was also a symbolic flower during the renaissance, and it also has links to the symbolism of the Virgin Mary. This link to the importance of the catholic church in Italian culture and history is also an important part of the flower's meaning.

Like the Italian wolf, the national bird of Italy has a very simple name – the Italian sparrow!

And just like the wolf, the Italian sparrow’s native habitat is the region in the north, up and over the mountains into the Swiss Alps.

They lay a maximum of 8 eggs pers season and sometimes migrate as far as Malta.

Unbeknown to most, Italy has a national tree. It is the strawberry tree, and has been associated with Italy since the unification of the country.

Well, with green leaves, white flowers and red berries the colours on this beautiful tree represent the Italian flag.

Grey wolf is the national animal of which country?

The grey wolf is also known as the Apennine Wolf and is generally regarded as the national animal of Italy.

What is the unofficial national animal of Italy?

There is no official national animal of Italy, but the Italian wolf is the top contender!

In a study of 19 encounters with wolves in urban areas, 4 were classified by humans to have been aggressive and a number of reports of aggression of livestock were recorded. However, it was also noted that the wolves were easily scared away by domestic dogs.

You will absolutely need to visit the Capitoline Museum when in Rome to check out the statue of the She Wolf national animal of Italy with Romulus and Remus – especially now that you know the significance of this majestic animal.

Check out how to get tickets and the list of other things to see in our detailed guide here.