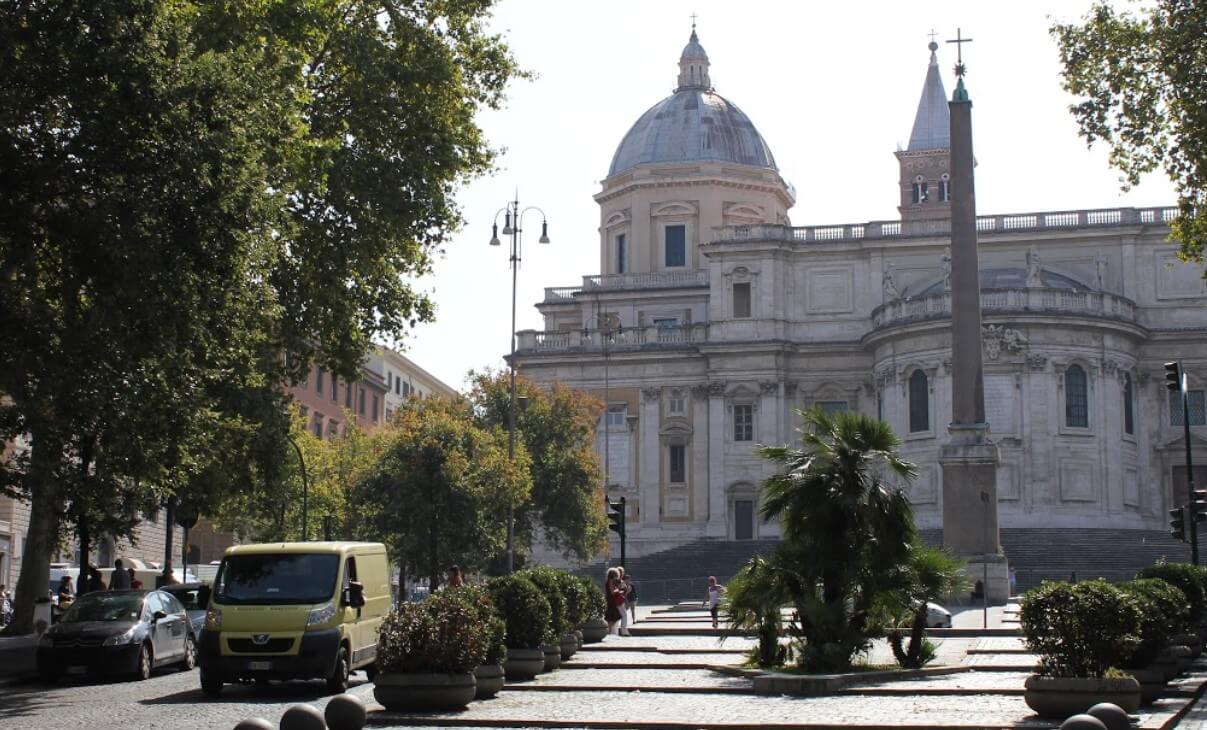 The Basilica Papale di Santa Maria Maggiore Rome is a Papal Basilica and is dedicated to the Virgin Mary. It is the largest of its kind in Rome. Although a Papal cathedral, the Church is not located in the Vatican City. It is to be found within Rome. However, the Italian state is obliged, thanks to the Lateran Treaty signed in 1921, to recognise Vatican sovereignty at this location. In addition, the owner of the Santa Maria Maggiore Rome is recognised at the Vatican.

Get the Free guide of Rome on your mobile right now

Only St Peter’s Basilica is claimed to be more beautiful than the Basilica Maggiore. The current church was built in 431 AD (the original one built by the childless couple lasted not even a century). However, parts of the church have been restored, added and repaired throughout the ages. This leaves an interesting mish mash of architectural features.

The Santa Maria Maggiore Triumphal Arch is one of the key features of the basilica. Featuring in the nave, the triumphal arch is adorned with stunning mosaics. These mosaics tell stories from Jesus’ childhood, and lead the eye of the viewer to the amazing apse.

The interior features even more delights. There is a statue of King Phillip IV of Spain, who part funded the build. Some of the windows have been covered over with magnificent frescoes that depict the life of the Virgin Mary. The mosaics are absolutely stunning. Coupled with the awe inspiring columns, the sight is truly remarkable.

The Christmas mass is renowned in Rome. The nativity scene is one of the city’s most beautiful. The mass is a sombre affair, but the music and atmosphere is magical. Held at midnight on Christmas Eve, it attracts locals and foreigners alike.

If you cannot make it for Christmas mass, do not worry. The 5th August celebrates the snow fall, when white rose petals will fall from the height of the church to coat the ground below.

Otherwise, mass is held hourly every morning until 12pm

For the full list of all masses and events held weekly, check out the link here.

You do not need tickets to enter of visit the Basilica. It is a working church, so expect to have to wait to enter if a mass is on. A token gift donation left in the offering box will be welcomed.

The Basilica is open daily from 7am to 7pm, but closes at 6pm in the winter.

Sundays and feast days open from 9am to 12pm

Take metro line A or B to Termini station. From there, you will have just a ten to fifteen minute walk to the Basilica, which is found on top of the Esquiline hill.

Perhaps you want to say near to the action and enjoy the view of Basilica with a quick walk? Pick a hotel nearby and enjoy the scenery!

What are the best restaurants in Rome Italy near Santa Maria Maggiore?

Touring this gorgeous cathedral surely works up an appetite. There are plenty of great restaurants just a stone’s throw from the cathedral. However, the Ristorante Casa Maria sure gets our vote. Dine on Roman specialities, pizza and pasta accompanied with magnificent views of the cathedral.

What is the Santa Maria Maggiore?

It's the largest Marian Cathedral in Rome, and one of four papal Basilicas in the city. It belongs to the Vatican City.

What to see in Santa Maria Maggiore?

The main features of this stunning cathedral include jaw dropping mosaics. These include those telling stories of Jesus and Mary’s lives. The golden ceiling is rumoured to have been decorated from the first shipment of gold from explorations in the new world. There are also amazing marble pillars and lots of statues adding to the Cathedral’s grandeur.

When was Santa Maria Maggiore built?

Where is the Santa Maria Maggiore?

The Basilica is located on the largest hill in Rome- the Esquiline hill- and is located in the Piazza di S. Maria Maggiore.

What saints are on top of Basilica?

There is so much more to see in this stunning cathedral than we could mention here. Please take a look – it is a great free thing to do in Rome and will for sure remain on your mind.

Once you have planned in time to see the Santa Maria Maggiore, head on over to some of our other information pages to help you complete the planning for your trip.