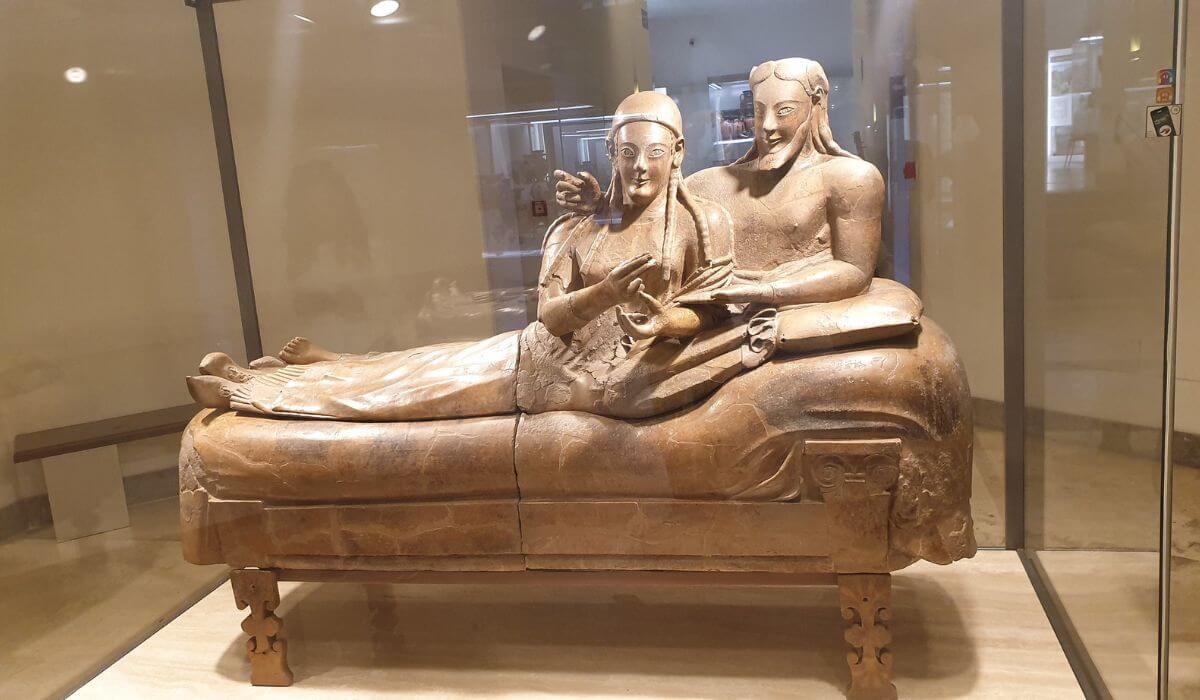 Of all the attractions and historic journeys Rome has to offer, the National Etruscan Museum is one of the best.

A glimpse into the history of the Etruscan civilization, it is a wonderful, informative experience.

To make sure you get the very best experience possible, here is a guide to making the most of your trip.

A Short History of the National Etruscan Museum

Housed in a Roman Villa that was built for Pope Julius III in the 1500s, it was owned by the Papal states until they were dissolved in 1870.

After a period of decline, the villa was transformed into a museum in 1889 by famous Italian archaeologist Felice Barnabei.

The museum is dedicated to the history of the Etruscans and as such dips into the origins of the Italian identity that is often ignored.

Over the years it has grown to contain over 6,000 objects in 50 rooms, covering over 3000 square meters.

In 2016, the Etruscan Museum Rome was named one of the 32 institutions of “significant national interest” in Rome.

As a result, it was given scientific and administrative autonomy, beginning a new chapter in the journey of this incredible museum.

Both the collection and the building itself give us a glimpse into the past of this great city and country.

Insider Tips & Free guide of Rome on Your Mobile

Built between 1551 and 1553 for then Pope Julius III, after whom it is named, Villa Giulia Rome was originally sat in the edge of the city.

Although it remains in the same place, the growth of Rome sees it now located in what would be considered the heart of the city.

After the Pope’s death in 1555, the villa remained in the ownership of the Papal States.

During this time the building was divided up and used by various relatives of sitting Popes.

It ultimately became the property of the newly formed state of Italy in 1870 as the Papal states lost authority.

In the 1800s as the Papal powers waned in the run up to the unification of Italy, Villa Giulia Rome fell into disrepair having become mostly unused.

However, it remained a prominent building, and in the late 1880s was chosen as the site for a new museum.

Archaeologist and politician Felice Banabei wanted somewhere to begin a collection dedicated to the Etruscan civilization, and the National Etruscan Museum of Villa Giulia was born.

Things to See at National Etruscan Museum in Rome

The National Etruscan Museum in Rome has over 6000 objects to see that take you on a journey through the history of the Etruscan civilization.

A unique experience, here are just some of the things you can enjoy.

Sarcophagus of the Spouses

This terracotta sculpture dates from the late 6th Century BCE.

It was found in Caere, now known as Cerveteri, in the Banditaccia necropolis. It shows a man and woman lying on a couch in beautiful detail.

Dating from around 500 BCE, these are three golden tablets inscribed with a variety of text.

Two are in Etruscan language, one is in Phoenician. They were discovered in 1954 in a dig at ancient Pygri and are the foundation texts for a temple dedicated to the Phoenician god Astarte.

A real highlight of the National Etruscan Museum in Rome is the Apollo of Veii, a life-sized terracotta statue of the god Apollo.

Created around 500 BCE, it is more than 2500 years old. It still retains the painted appearance it began with, when it was first placed at the highest point of a temple.

With over 6000 pieces on display, there is so much to see at the National Etruscan Museum in Rome.

Housing key Etruscan pieces from a wide range of sources, it offers over 6000 pieces that show the art, lives and values of the Etruscans.

The Tarquinia Etruscan National Museum is situated in Tarquinia, Lazio, and is host to a collection primarily excavated from the Necropolis of Monterozzi.

Both are well worth visiting, but if you are in Rome, the National Etruscan Museum is the one to see.

Top Attractions to Visit Near to the Etruscan Museum Rome

The museum offers a unique and enthralling experience, but you are in Rome and want to see as much as possible!

Luckily, there are a number of other attractions nearby, so you can fill your day without lots of traveling.

A stunningly beautiful square with a historic Egyptian Obelisk in the center.

You can sit and relax here and admire the beauty of the architecture surrounding you, or just watch the world go by as you take a break from exploring.

Set among the trees in the stunning Villa Borghese, this is a magnificent museum and gallery.

The villa itself and its gardens are as much an attraction as the collected art and other works.

In addition, various exhibitions are offered throughout the year, so you never know quite what you will find.

Created in 1883 to house the contemporary works of art for the new Italian State, this gallery holds around 5000 pieces today.

With paintings, sculptures and more, the collection includes everything from neoclassical art to 1960s abstracts, including a wide range of works from renowned artists.

A 20th century collection includes Futurist, Cubist, Dadaist and Abstract, featuring some of the finest works of each movement.

Of course, Rome is a city of infinite possibilities, and you are never far away from something new or unique, so this is just a small sample of the things you can do and see near to the National Etruscan Museum in Rome.

A lovely restaurant that provides relaxed, traditional dining and traditional Italian cuisine with a twist.

A great place for lunch or in the evening, with superb service. Dine outside in the summer for the best experience.

A fantastic fusion restaurant offering some of the best sushi you will find in Rome. Grab a bite from the menu or try the ‘all you can eat’ option for extra value after a long day exploring Rome.

Burgers, Pasta, Fusion, and spectacular desserts, Bubi’s has it all.

With great service, relaxed eating, and something for everyone on the menu, it’s a great place for visitors to enjoy the best of Italian dining.

Affordable Places To Stay Nearby

Finding the perfect place to stay when exploring the National Etruscan Museum and all the other attractions Rome has, is key to having the most enjoyable trip.

Here are our picks for places to stay near the museum.

Just half a mile from the museum, this suite offers home comforts with an affordable price.

All the amenities, including a full kitchen and a washing machine, are perfect if you are on a long tour.

There are quality furnishings throughout and light, spacious accommodation to relax in. Independent living with all the benefits of hotel service.

Less than a third of a mile from the museum, so within easy reach of all the attractions the area has to offer, this is a wonderful guest house with bright, spacious rooms.

High-quality accommodation is comfortable, with free wi-fi and a tea/coffee maker in each room. They have family rooms if you are traveling with children too, all at one of the best value rates in the area.

The National Etruscan Museum is open from Tuesday to Sunday every week between 9.00 AM and 8.00 PM. Rooms close at 7.30 PM and the last admission at 7.00 PM. The Museum is closed every Monday.

Tickets for the museum cost €10 for adults, with concessions costing just €2.

If you are in a group of 10 or more, you should let the museum know of the date and time of your visit to avoid crowding the entrance, contact them at mn-etru.prenotazioni@beniculturali.it.

Rather than queuing at the museum, which can mean a relatively long wait at times, there are other options.

You can reserve your tickets online to avoid the wait, Tiqets offers a great service for the National Etruscan Museum as well as many other attractions in Rome.

Tip – The other option is to visit the museum as part of a tour. One of the best is from Get Your Guide, which includes entry to the museum as well as a professional guide to really get the most from the experience.

Location & How To Get There?

The National Etruscan Museum in Rome is actually spread across two villas, the Villa Giulia, and Villa Poniatowski just a short walk away.

You can reach the museum by Metro, taking Metro Line A to the Flaminio Stop, on trams 2,3 and 19, where you have a short, 15-minute walk to the Villa Giulia.

How to cite Apollo of Veii from National Etruscan Museum?

Apollo of Veii is situated by the Tempio di ALatri towards the end of the tour if you follow the recommended route around the museum. You can easily find Apollo or any of the main attractions by downloading a map of the museum from the main website.

Because Etruscan style and craftsmanship was not replaced by Roman versions, but more absorbed into it, it can be difficult to see where Etruscan architecture ends and Roman begins. However, the Etruscans introduced gladiatorial combat to Romans, as well as the arch. So many of the most famous Roman sites have very strong Etruscan influence.

Is the National Etruscan Museum of Villa Giulia accessible for people with disabilities?

Yes. The site has had most architectural barriers, and there are lifts available, as well as wheelchair loans for visitors who need them. The wheelchairs can be booked in advance. In addition to excellent wheelchair access, the museum has tools for visually impaired visitors, including tactile reproductions of many exhibits. The museum holds regular events specifically for the visually impaired.

How Rome became Rome is one of the stories of Europe, it has influenced the region for millennia and continues to do so today.

Yet, despite their involvement, the Etruscan part of that story is not one many are familiar with.

A visit to the National Etruscan Museum is to learn about fascinating people who helped shape the world today, and an experience you should not miss.