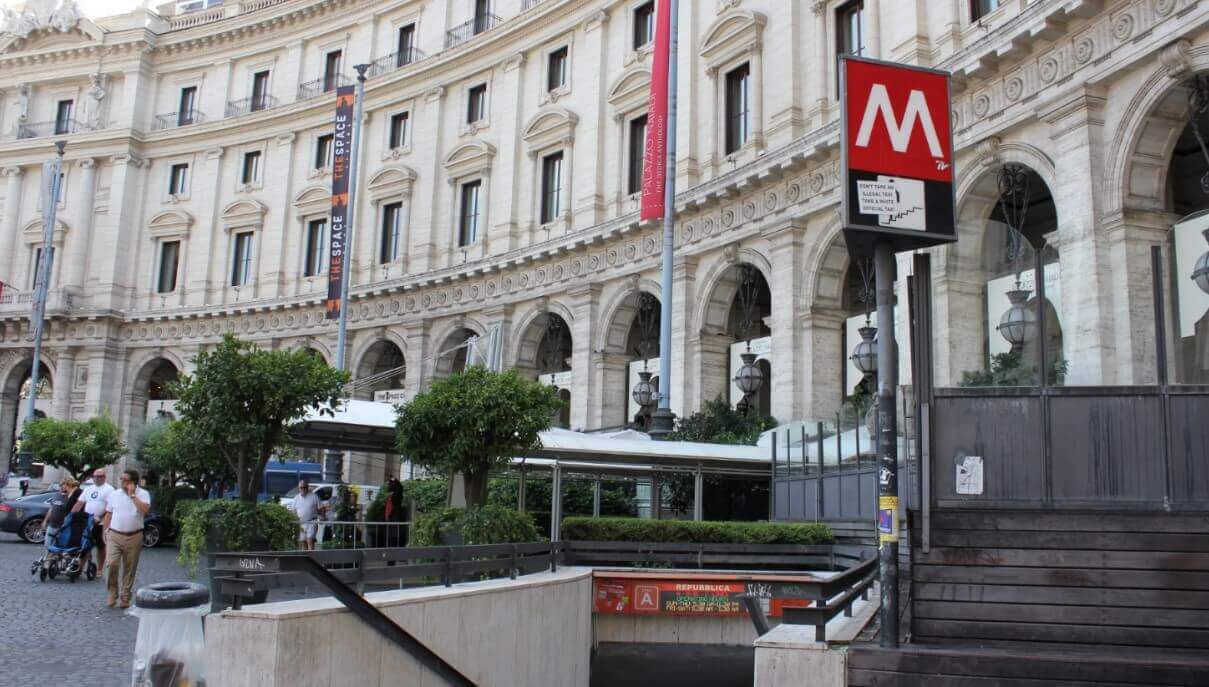 One of the best ways to get around Rome is by using the metro. Here, you can avoid the sometimes manic traffic above ground. It’s also a really reasonably priced way to enjoy the city. Check out all you need to know about the Rome subway as you plan your trip!

The history of Rome Metro

The Rome Subway is a bit younger than some of its European counterparts. The Paris Metro was inaugurated in 1900, the London one a little before that. Rome’s dates back to 1955.

Lines A and B form the shape of the letter X. Both run right through the main Rome train station – Termini.

Of course, as you can imagine, the construction process wasn’t easy. On top of the usual challenges you would have digging a tunnel underground in the mid 20th century of course.

Because, Rome – as you know by now from reading our other travel guides – is teeming with ancient artefacts, excavations and hidden treasures.

Rome got destroyed – or “sacked” at least 6 times. After each destruction, and because of course there were no bulldozers – they just built on top of the rubble!

Want to See Free Guide of Rome on Your Mobile?

Below, you can check out the Rome Metro Map. It’s of course really handy when in Rome to have a hard copy, with a map of Rome subway stations. Familiarise yourself with the layout before you leave your hotel. However, because there are only three metro lines, it’s pretty straightforward to get around.

You can also download a Map of Metro Stops to your phone. Check out the Rome Metro – Map & Route planner on Google Play for Android or Rome Metro & Tram by Zuti for Iphone.

Consisting of 3 intersecting lines, the metro is not that complicated to navigate. Here’s a list of the 3 lines and their 73 stops. Check out the Rome metro station map to decide where you need to get off.

Still being worked on, Line C is planning new connections to the existing lines A and B. Keep checking the Rome metro rail map for new additions.

You will find a range of tickets available depending on how much or how little you plan to use the metro. A single ticket usage ticket – which is for one journey no matter how long (or shot) – costs just €1.50. Or, you can by a range of passes including a 7 day pass for just €24. But remember, the centre of Rome is fairly walkable – so you may get decent value in just purchasing one or two single use tickets every day.

Another great option is to consider getting a Roma Pass. This will give you 3 days of unlimited travel on the entire Rome public transport network for €36. On top of that, you’ll get discounted entry to 2 museums. Check out this option, plus some more Roma Pass ideas in our full Roma Pass Guide. Or get your Roma Pass directly online here.

You can opt for this card that includes 72 hours of unlimited public transport + a one-way airport transfer + an audio guide on Rome. Check prices here.

Oh, and remember. Don’t buy a ticket for children under 10 – they travel free. There is no discount however for seniors on the Rome metro.

Where to get Rome subway tickets

The most obvious place to get your tickets is within the metro – you have to have a ticket before you board. But you can also get them in local bars and tobacconists – known locally as tabacchi.

But as said before, you can get a public transport pass by booking online here. This can help you save time and you'll be able use the metro as much as you want during 3 days!

How to use your Rome metro ticket on board

You won’t generally need your metro ticket on board – inspectors are more likely to be on buses and trams where there is a validation required on board. Instead, you need a ticket to get through the barriers at any metro station, so it’s unlikely you’ll be able to cheat the system. Plus it is so cheap, why would you bother?

Open for the morning commute from 5.30am, the metro closes at 11.30pm. The only exception is Saturday and Sunday evening, when it is open until 1.30am. During the day, trains will come around in under 5 minute intervals.

Rome metro tips and facts for every traveller

Does Rome have a subway system?

Rome has a pretty simple Subway system. Lines A and B are the most developed, but there are limited changeovers when compared to other big cities. Line C is still being worked on and there are plans to bring greater interchangeability across the three lines.

How to buy metro tickets in Rome?

Get your tickets in the metro stations in Rome. You can also pick them up in tobacco kiosks and local bars.

How much is a metro ticket in Rome?

How to use Rome metro?

You need your ticket before you head to the platform, as there are automated barriers. Once on, you can journey to your destination!

Rome’s metro is generally safe. Of course, you need to keep your belongings close.

How to get to Colosseum by metro?

The conveniently named Colosseo station will be the station you need to go to the colosseum. Use line B.

Now you’ve had the lowdown on Rome’s metro station, why not check out some of our other resources so you can plan the rest of your trip.