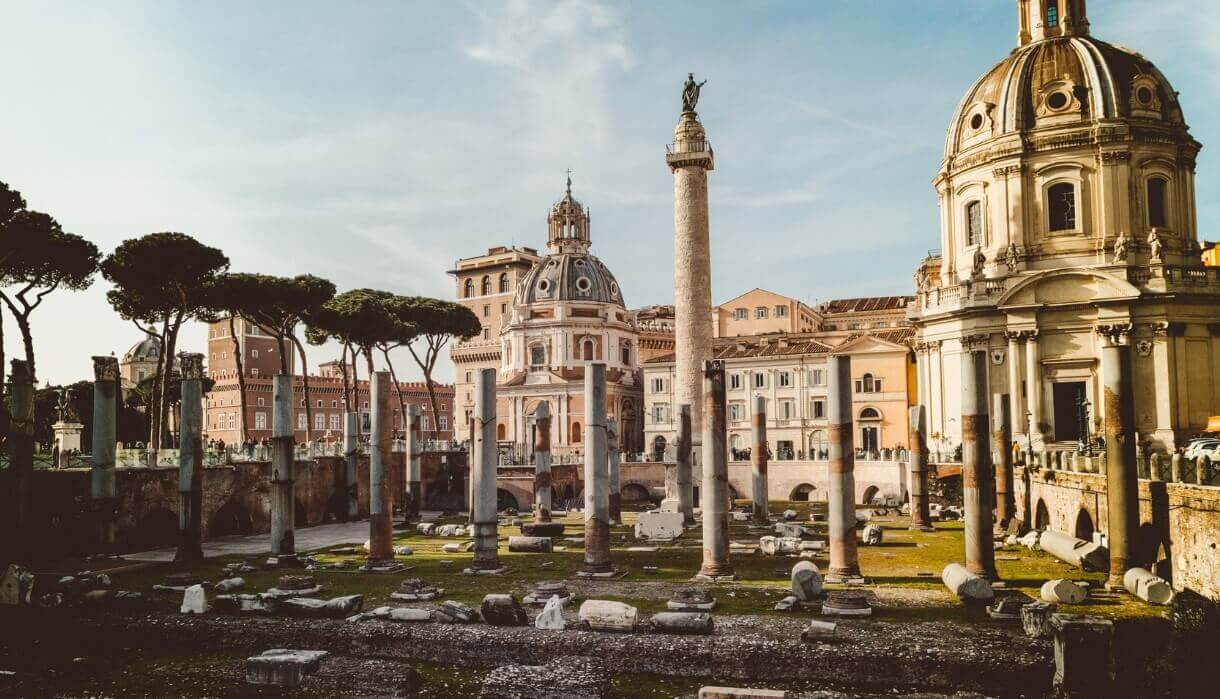 There are ancient Roman ruins dotted all around Europe, but nowhere are they so spectacular as in the capital city itself. From old villas, temples and columns to tiny little pieces of pottery from an age gone by, Rome is fascinating.

Let’s take you on a tour of the must see sites, so that you can impress your friends and companions during your trip. Let’s go!

Test our Free guide of Rome on your mobile

The Arch of Constantine is located in between the Palatine Hill and the Colosseum. This Triumphal Arch was built as a celebration of victory in the Milvian Bridge battle. Straddling the Via Triumphalis, which was a traditional processional route for post battle victory celebrations, it is an impressive sight. Completed in the early 4th century it is the biggest of its type and is dedicated to Constantine. The arch is visible from the Colosseum but can be accessed without a ticket.

For sure, the Colosseum is one of the most famous amongst the best ruins of Rome. Access to this spectacular sight is ticketed, and you can get combi tickets for both the Roman Forum and the Colosseum. With up to 6 million visitors a year, the Colosseum is a top attraction. We recommend you plan your visit to this ancient Amphitheatre carefully to avoid queuing for hours. You can either opt for a skip the line ticket here or a pass – Rome Tourist Card (buy here) – which is the only one to guarantee you an access to the Colosseum.

The Colosseum deserves a whole guide in itself. Of course, we already thought of that! So, to get the full lowdown on the Colosseum, check out our detailed guide on What you need to know before your Colosseum visit.

There’s another Arch on the list here – the Septimius Severus. This arch is located within the compound of the Roman forum (ticket here). This one is a celebration of winning battles over the Parthians. The arch is one of the best preserved Roman ruins, probably due to the fact that it was part of a church for a long time, and cared for accordingly. You can see the inscription clearly on it, dedicated to Emperor Septimus Severus.

Where arches are concerned, the Titus Arch surely needs a mention. It is a 1st century triumphal arch, this time located on the Via Sacra. Dominitian had the monument constructed in memory of his brother Titus and victory over a Jewish rebellion in the Holy Lands. On the arch you can see the spoils of the wall being depicted – including a Menorah.

This square is a treasure trove amongst Roman historical sights for those who want to uncover the ruins of Rome. It is steeped in history and is believed to be the place in which Julius Caesar was assassinated! During construction work in the early 20th century, not one but 4 ancient temples were discovered!

Here, you will also find Pompey’s Theatre. There are plans for a path to be installed amongst the ruins so that in the near future you can get up close to them.

We’ve seen some pretty impressive Roman Aqueducts in our time – the Pont du Gard in Nimes, France is one, as is the Segovia in Spain. But in Rome? Well, there were at least 11. Some are still in use today.

You should check out these 3 aqueducts when in Rome:

The Ancient Roman ruins of the Flavian Palace

Situated in the compound of the Domitian Palace, the Flavian palace is located on the Palatine hill (ticket here). Domitian used the huge and impressive rooms to entertain and host meetings. It contained a massive audience hall and a Basilica, amongst other suites and rooms.

The palace was ordained with fountains and marble. You can visit the ruins as part of a tour of the Colosseum, Roman Forum and Palatine Hill.

The oldest part of Rome’s settlement history, the Palatine hill is a massive treasure trove of Roman ruins in Rome. The beginnings of Rome originated here, and as a result the Palatine Museum holds a vast collection of interesting artefacts. The site contains several splendid Roman monuments. Aside from the Palace of Domitian, the open air museum includes the ruins of several houses and temples.

This amazing second century Roman temple is now a church and was built on the site of an even older temple. The spectacular dome and the stunning interior draw 7 million visitors a year. Pantheon is the best preserved of the ruins in Rome – the floor remains in good condition and the dome still stands, despite being the largest of its type in existence. You should take an audio guide there!

This is a former royal house that was home to the kings or other high ranking members of the political hierarchy. Located on the Via Sacra, the structure was rebuilt in 36BC and now lies in ruins that can be toured as part of a visit to the Roman Forum. Check out our full guide to the attractions of the Roman Forum, Colosseum and Palatine Hill.

The ruins of this extensive 2nd century Roman villa contain their own aqueduct and thermal baths. On their excavation, some fabulous Roman sculptures were uncovered, and the site now houses a museum. The ruins were so big, and were occupied by the Quintili brothers, before it became a part of the imperial properties.

FAQs – our most received questions about Roman Empire Ruins

Check out this list of our most received queries about ruins in the beautiful city of Rome.

Why are Roman ruins buried?

There are a number of reasons for this. First, back in the days when machinery was not available, it was much easier to build on top of old buildings - the rubble would be spread out to make a reasonably smooth surface, and they would begin construction. In addition floods would dump layers of sediment on top until the ground level would slowly rise.

Where are the Roman ruins?

Roman ruins span Europe and beyond, from Hadrian's wall in the United Kingdom to North Africa, Syria and Lebanon.

Where can I find a map of Roman ruins?

Simply check out Google maps of the ruins across Europe and North Africa.

Where I can find Roman ruins outside of Rome?

You can find these literally everywhere. From Spain and Portugal, to Libya, Croatia, Jordan, Turkey, Israel. And these are just one of the most famous ones.

Where are the largest Roman ruins found?

Where are the best Roman ruins in the world?

Oh there are so many ! But of course, the Colosseum and the Pantheon are some of the best within Rome!

How old is Rome?

Rome is nearly 2800 years old! As a result, the attractions available to a visitor are simply too great to number! You would need weeks and weeks on end to see them all. However, you can certainly cover the main ones on a trip to Rome.

Now you have the guide to the best Roman ruins, check out how to plan the rest of your trip from Rome. We have plenty of resources here to help you with sorting it all out.

And, maybe you want to see if a city pass is a good option to cover some of the sights. Read our guide to the city passes for Rome.