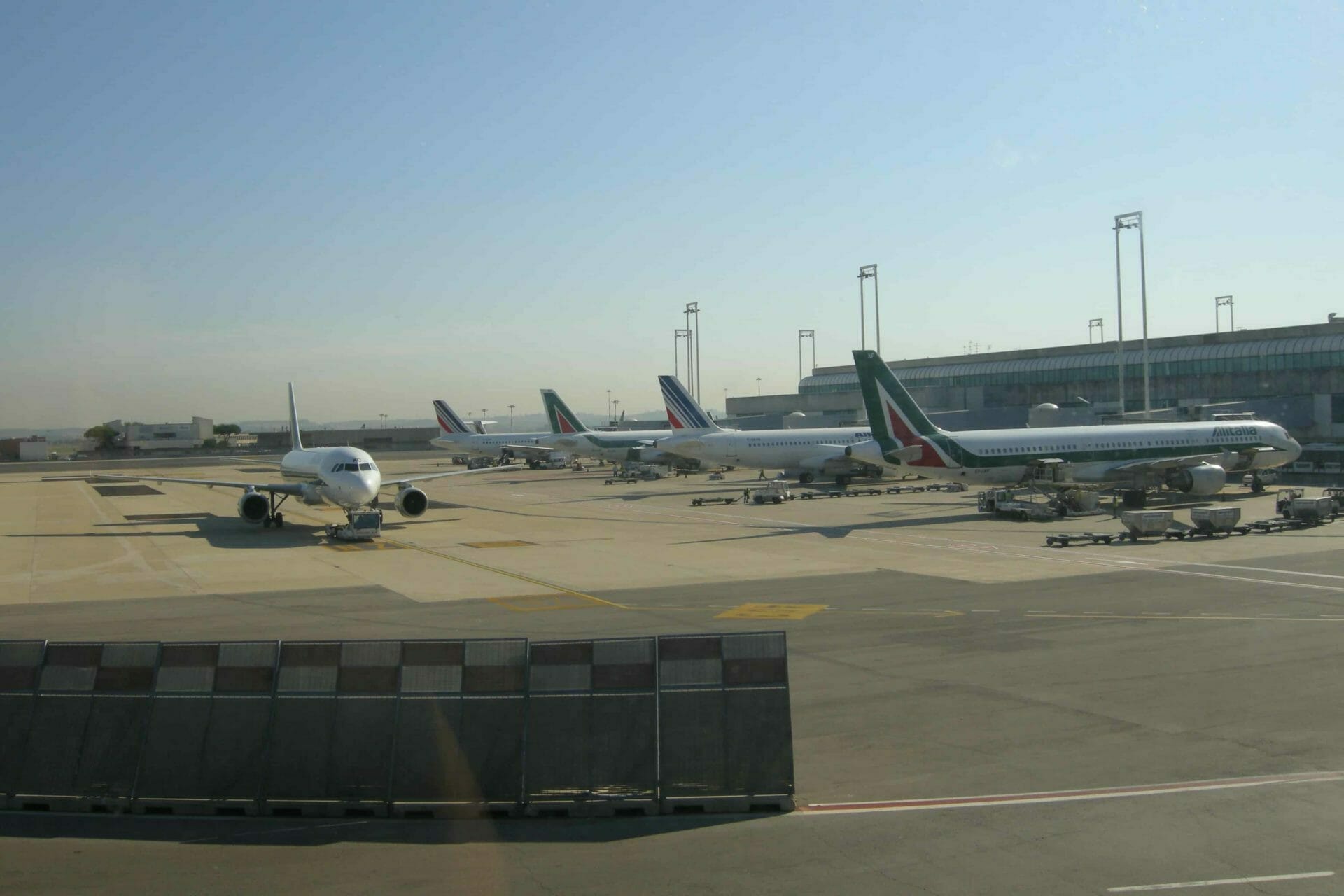 Rome international airport: the best Rome airports to fly into

Rome has two international airports – Fiumicino (FCO) and Ciampino (CIA). Deciding which one to fly into is pretty much determined by where you’re coming from and what your budget is.

Fiumicino is the main Rome international airport used by the big airlines such as Alitalia, British Airways, and American Airlines. If you’re coming from another continent, you’ll probably fly into Fiumicino.

Ciampino is a very small secondary airport that caters to budget airlines like easyJet, Ryanair, and Wizz Air. If you’re coming from elsewhere in Europe and don’t like spending a fortune on flights, this is the Rome international airport to fly into.

Long haul flights (over 4 hours) generally land at Rome FCO. That means this is where you’ll fly into if you’re coming from Australia, New Zealand, the US, Canada, South America and Southern Africa on one of the big international airlines. You can find a complete list of all the airlines flying into Rome FCO here.

Rome Airports by country of departure

Given its much smaller size, Rome CIA caters to short haul flights (under 4 hours) by budget airlines within Europe. Airlines flying into Ciampino from various European cities include Ryanair, Transavia, easyJet, Air Berlin, and Wizz Air.

We recommand getting the Rome Tourist Card (check price here) which include a free one-way transfer from both Fiumicino and Ciampino airports to the city center. A hop-on-hop-off tour is also included for 24 hours.

The Rome Tourist Card also provide you skip the line entries to most of Rome's top attractions (St Peter's Basilica, Colosseum, Roman Forum & Palatine Hill). If you paid an extra, you will get fast track entry to the Vatican Museums. You'll get 20% discounts on many other attractions too.

Why choose the Rome Tourist Card?

Fiumicino has a good transport connection

Even though Fiumicino is the biggest of the two Rome airports, it’s nothing compared to London Heathrow or Paris Charles de Gaulle when it comes to size.

Rome FCO has four terminals, of which the first three are in the main airport building. Terminal 5 (for some reason there is no Terminal 4) is for flights landing from and leaving for the US and Israel and connected to the main building by shuttle bus. In addition, a free shuttle bus runs every 15 minutes between the airport, the official car parks, and the Cargo City area.

As the biggest Rome international airport, Fiumicino is well connected to Rome by public and private transportation. Two trains, the Leonardo Express and FL1 local train, leave from the airport. In addition, there is a choice of cheap bus transport and more expensive but flexible taxi and shuttle services.

If you plan to get around Rome in public transports, a good option is the 72 hours transport card. This include metro, bus, train and tram.

Make travelers have a better experience

Rome FCO certainly tries its best to improve the passenger experience. In 2016, the best Rome airport was ranked first among the European Union’s large airports in terms of passenger satisfaction.  Some of the reasons why are:

Passengers waiting for their flights can do some last-minute shopping of top Italian brands or get a last taste of Italy at one of the restaurants or Gelato stands.

Tip: Arrive at least 2 hours, if not 3, before your flight. Because the airport building is relatively small for a major Rome international airport the queues at both the security check and passport control can get quite long.

Note: Flying into Rome airport FCO is generally more expensive than flying into Ciampino. The reason is that it not also caters to long-haul international flights but also to domestic flights by the major airlines.

If you’re travelling on a tight budget, Ciampino is the airport to fly into on one of the low-cost airline flights. In fact, it’s possible to fly to Rome via Ciampino for under €50.

Ciampino has only 16 gates compared to the 36 of Fiumicino. This old military airport is so small it has been described as a glorified bus terminus.

While Ciampino is the closest to the city centre of the Rome airports, the public transport connections aren’t as good as those for Fuimicino. There is no train station at the airport, although the closest station in Ciampino town is only five minutes away. However, you may have to wait some time to catch a bus.

But as mentioned ahead, the 72-hours public transport card offers as a bonus a free one-way transfert from Ciampino Airport to Rome city centrer (buy online here).

On the upside again, chances also are you won’t wait as long for your luggage after landing as at Fiumicino. Which means you’ll be sightseeing in Rome quicker than you think, especially if you pre-book a shuttle or Welcome Pickup to wait for you as you exit the airport. As an appetizer, you’ll drive down the Via Appia, the ancient Roman highway with its fascinating history.

The main motivation for passengers flying into Ciampino remains the cost. And because it’s smaller, check-in is generally quicker. The only downside is once you’re through security and passport control there’s not much to do before you board.

Which Rome Airport Is Best to Fly Into?

It’s not too difficult to decide which is the best Rome airport to fly in to. If you’re arriving on a long-haul flight, you really have no choice as these mostly land at Rome FCO.

Passengers travelling from within Europe are dictated by their money purses. Those on a tight budget will generally find it much cheaper to fly to Ciampino with one of the low-cost airlines. Those who can afford more expensive tickets may opt for the extra comforts of Fiumicino.

Transfer times between the two airports and Rome city centre differ minimally. Therefore, it shouldn’t really influence your choice of airport. On the other hand, the cheaper train and bus transfers are much better from Fiumicino with several options to choose from. Read on our article on Rome Airport transfers to choose the option that suits you.

The SIT shuttle bus from and to Rome is a great option with €11 a return ticket (see ticket here).

To same time and frustration getting to and from the best Rome airports, a selection of transfer options is available to book online. They include:

Other airport transfers options are available:

Getting the Roma Pass at the Rome international airports

If you have purchased a Roma Pass before getting to Rome, you can pick up your pass directly after arrival.

Pick up your Roma Pass at Fiumicino

After landing and passing through customs and luggage collect, you will find the office where to take your Roma Pass. It is located in the external arrivals hall.

Pick up your Roma Pass at Ciampino

Located in the International Terminal T3, the Tourist Information office is on your right after the customs control.

Conclusion to best Rome airport to fly into

In the end, it doesn’t matter which Rome international airport you fly into. Both are easily accessible from the city center and offer decent passenger services.

Depending on where you’re flying from, you may not have the luxury to choose. If you do, your budget will most likely dictate your choice of airport.