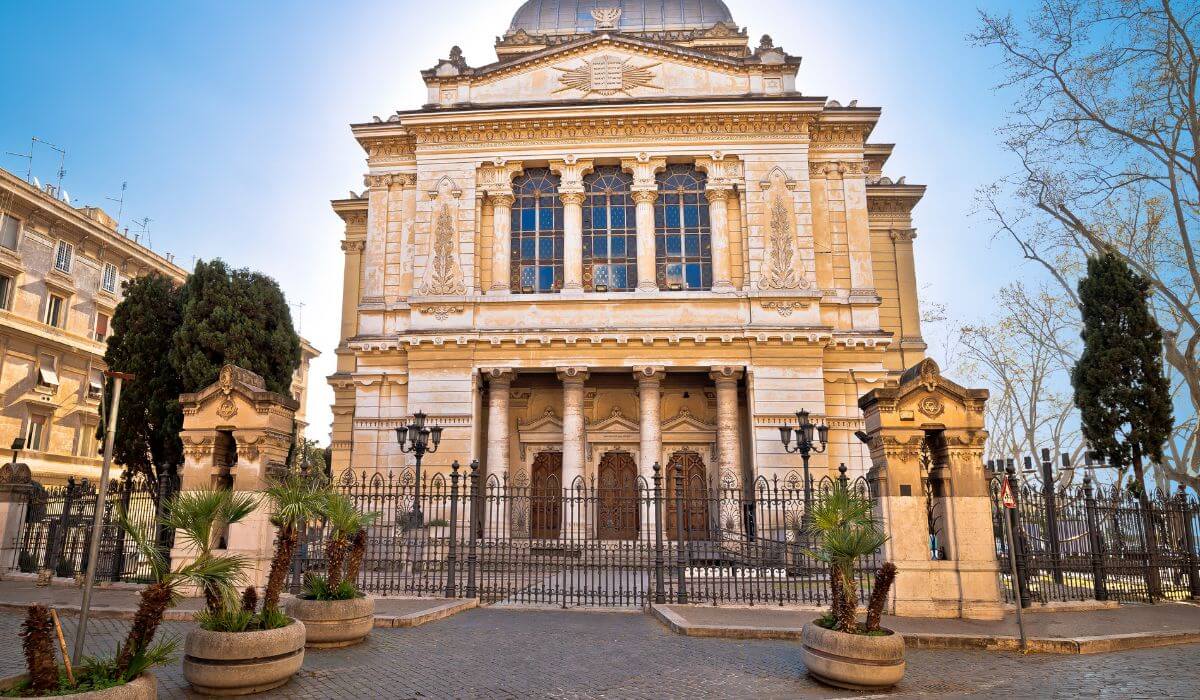 Attracting visitors from around the world, the Jewish Museum Rome is one of the highlights of the city.

Telling the story of Jews living in Rome over the last 2000 years, The Jewish Museum of Rome shines a light on a part of Roman history few are aware of.

Here are our tips for making the most of your trip to this fantastic location.

The Jewish Museum Rome was established in 1960 to display the artifacts and historic items relating to the history of the Jewish Community in Rome.

They were mostly collected from the Ghetto synagogue that served the Jewish Community in Rome for many years.

Beginning as a single room situated behind the Torah Ark in the Great Synagogue, the museum has become a must-see for visitors to the city today.

That increased popularity and a growing collection of important pieces has meant a need for more space over the years.

Renamed as the Jewish History Museum Rome in 2000, the museum expanded to occupy the basement of the Great Synagogue a few years later.

The official opening was on 22 November 2005, and in 2009 a foundation was set up to support the museum, named in honor of the former Chief Rabbi, Elio Toaff.

Make Your Trip Easier – Free Guide of Rome on Your Mobile

The Jewish Museum Rome includes an array of fascinating pieces that show the history of one of the world’s oldest Jewish Communities.

That community has existed in Rome for two millennia, and housed in the Great Synagogue we find beautiful and thought provoking items that cover all of it.

At the center of the community today, the Great Synagogue was completed in 1904 and sits on the banks of the Tiber River. The carefully chosen site overlooks the former ghetto where the Jewish community had lived for most of its existence.

However, the current Synagogue was not the first in the 2000+ years of history of Jews in Rome. The previous Synagogue, known as the Jewish Ghetto Rome Synagogue, was demolished along with the Ghetto itself after the 1870 unification of Italy.

In fact, that Ghetto Synagogue was 5 separate synagogues, and it is from these synagogues that much of the collection of art and other pieces displayed by the Jewish Museum Synagogue Rome were originally housed.

Tip – Today, the Great Synagogue makes for an impressive sight, and in addition to the museum is worth spending time in when it is possible.

The Ghetto of Rome was established in 1555, occupying the Rion Sant’Angelo area. It was home to the Jewish Community until its demolition in the late 1800s.

It was established by, and for the most part overseen by the Papal States, aside from a period where Napoleon seized control of the city.

The Jewish Ghetto was initially home to around 2000 people but grew considerably over the years. This is the oldest Jewish Community in the world outside Israel, beginning with former slaves of the Roman Empire in around 161 BCE.

Life in the ghetto was one of crushing poverty, with the community locked in the ghetto every night. Jews were not allowed to live anywhere else, yet they found ways to thrive.

By the mid-1800s it was clear the ghetto was becoming unsustainable, with as many as 10,000 Jews living there.

With the unification of Italy in 1870, the Papal States ceased to exist, and with that came an end to the requirement for Jews to live in the ghetto.

In 1888 troops from the Rome government arrived and began tearing down the ghetto, being treated as liberators by those still stuck within.

There is so much to see and do at the Jewish Museum Rome, but here are our top 3 things you shouldn’t miss while you are here.

Spanning over a thousand years of history, the fabric collection features over 800 types of fabric used by the Jewish community throughout that time.

With examples from as far back as the 700s, it is a fascinating glimpse into the lives of Europeans who lived so long ago.

The Incredible Fabric collection came together within the 5 ghetto synagogues, and is a record of textiles from across Europe, as the ghetto population bought secondhand fabrics for their own use.

2. The Way the Museum Is Laid Out

Not every museum gets it right, but the Jewish Museum Rome has mastered how to display objects in the best way possible.

They manage to highlight the beauty and interest each piece offers, but also tell the complete story of the Jewish Community from start to end.

It’s not just a slideshow of wonderful objects that some museums become. Instead, it delivers an educational experience that shows the creativity and rich history and culture that this ancient community has given to the world.

The Great Synagogue is an important building for the community today, but it is also a beautiful one.

The Jewish Museum of Rome is not just full of works of art, incredible fabrics and historic silverware, among many other objects, it is a work of art in its own right.

That is before you take a look around the Synagogue itself, another architectural masterpiece to enjoy during your time in the area.

How To Get from Jewish Museum Rome to Trastevere

Head from the Jewish Museum Rome to Lungotevere de' Cenci in front of the Synagogue.

From there go to Ponte Garibaldi and cross the river. Then simply travel down Piazza Sidney Sonnino to reach Viale di Trastevere.

You can see how easy it is from the map below.

While the museum itself has no specific dress code, you will be in and around the Synagogue, so should take care to respect the Jewish dress code.

This means no bare shoulders or knees, and men should wear a hat or kippah. The Synagogue provides coverings for shoulders and kippahs for men should you need them.

What Else You Should Visit in Jewish Ghetto

The Jewish Ghetto may have been demolished in the 1800s, but the area is still full of wonderful pieces of history.

Here are three you shouldn’t miss:

A day exploring the museum and other nearby sites will definitely build your appetite, luckily there are plenty of quality places to eat nearby:

Having a comfortable place to stay is part of enjoying your visit to Rome.

With these hotels you also get easy access to the Jewish Museum Rome, the Ghetto and all the other wonderful sights in the area.

With great views across the city, comfortable accommodation and free Wi-Fi all just a quarter of a mile from the Jewish History Museum, it’s the perfect place to stay.

Rooms have satellite TV and tea/coffee makers and offer a wonderful home-cooked breakfast.

Wonderful apartment-style accommodation that benefits from free Wi-Fi, and a fully equipped kitchen.

It also includes a washing machine, great if you are on a long trip. A private patio and space to relax let you experience Rome at your own pace.

A stunning lifestyle hotel situated in a building that can trace its history as far back as the early 900s.

Filled with antiques and all the amenities you could want, this hotel offers luxury on a grand scale within a few minutes’ walk of the museum.

Tip – The Museum is closed every Saturday as well as all Jewish Holidays. You can find the exact dates by visiting the website.

Winter opening hours vary depending on the time of year:

Prices for entry to the museum are €11 for adults with €8 for concessions.

Children under 10 and any visitor with a certified disability can enter the museum for free.

There are also a number of tours that include a visit to the Synagogue and the Jewish Ghetto, including the following.

Taking you through the Ghetto and unlocking the secrets that only an experienced guide can show you.

This tour includes a visit to the Synagogue but not the museum, however it is a great starting point for exploring the rich history here.

There are several official tours you can book through the Museum site, including a guided tour of the Jewish Quarter or just the Museum itself.

There are several other tours available from a range of operators, including a food tour for those who love to sample different cuisines. There are a number of guided tours that take in the Synagogue among a range of other Rome attractions.

Location How to Get There

The Jewish Museum Rome is located in Via Catalana, close to Tiber Island in the Trastevere neighborhood.

There are a number of options for public transport, with Circo Massimo being the nearest station for the Rome Metro, about a kilometer away from the museum.

Bus numbers 23, 63, and 280 stop right outside the Synagogue, and are probably the easiest options for travelling.

What days is the Jewish Museum open in Rome?

The Museum is open Sunday to Friday, and closed every Saturday. It is also closed on all Jewish Holidays, the exact dates for each year can be found on the main Museum website.

Is Trastevere the Jewish ghetto?

No. The two are separate areas, with Trastevere the other side of the Tiber River. Both are historic places with their own stories to tell, and there is much to see and do in both.

How to visit the Great Synagogue of Rome?

The Synagogue is an active worship center, and as such can only be visited on specific tours booked through the museum. The availability varies depending on the time of year and whether there are any Jewish Holidays at the time of your visit.

Can I wear shorts in the synagogue?

No. The dress code requires appropriate clothing, this includes trousers for men and below knee skirts for women.

Should I buy tickets before or after the checks?

Buy tickets after checks as they offer no refunds for anyone refused access for any reason.

With over two thousand years of history brought together in an impressive display set within a superbly beautiful Synagogue, the Jewish Museum Rome is a wonderful insight into a story few are aware of.

A glimpse of history from across Europe, it is a must-see for anyone in Rome.

Get your tickets by reserving today your walking tour and make sure you don’t miss this amazing experience.