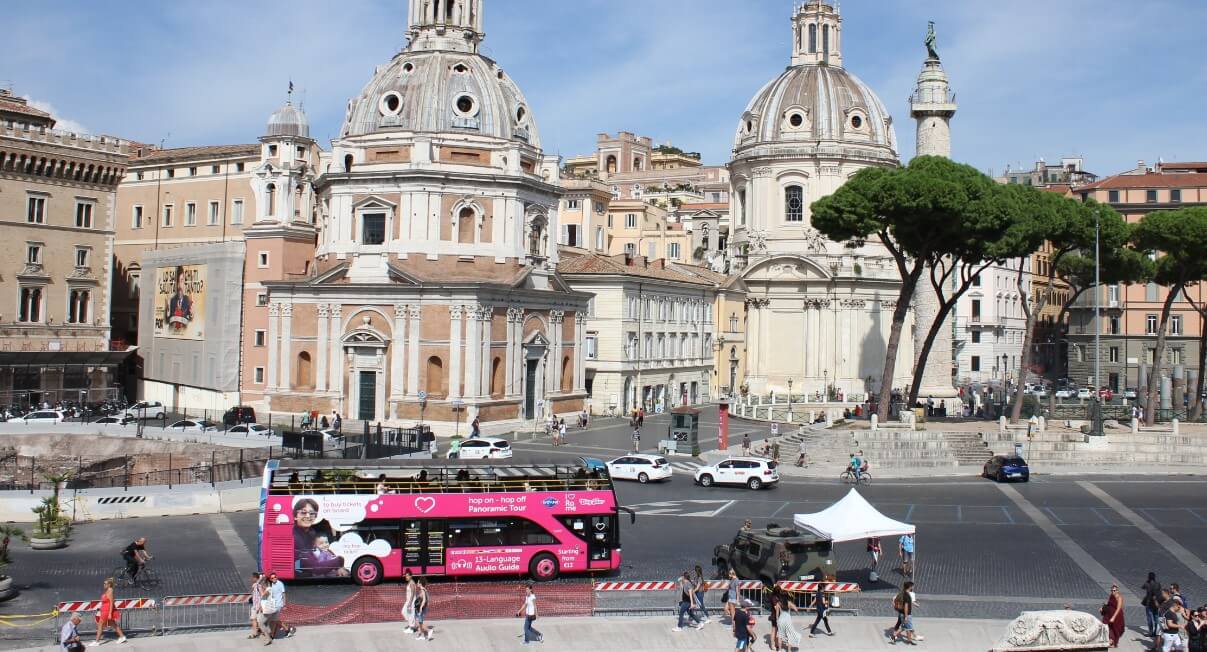 Rome weather in August is hot and the tourist attractions are often busy. But it is also a great time for exploring the city at night, for long dinners in the open air and even swimming.

Why is August a Good Time to Visit Rome?

The Vatican and the Colosseum will be very busy, but actually the rest of the city empties out pretty nicely as locals head off on vacation. Let’s explore Rome in August together.

What Is the Weather like in Rome in August?

Expect daytime temperatures to be in the high twenties celsius as a minimum. Usually, they get into the mid thirties! In the evening you will get a bit of relief, with temperatures dipping into the low twenties (celsius). You might get rain on one or two days if you are unlucky!

The temperatures are pretty consistent – around 30 degrees celsius – and may only begin to drop off one or two degrees towards the end of the month. In 2020 the last day of August was the only day on which it rained!

Rome Weather in August Forecast 2022 and Beyond

Expect long sunny days, temperatures at around 30 degrees celsius and very little to no cloud cover or rain. Especially during the evening – when the temperatures will dip into the low twenties – you can explore the city with ease. Better to stay out of the midday sun though…

Planning for Your Trip to Rome

Make sure you book flights and hotels well in advance – especially with flights – the prices can get pretty expensive if you leave it too late. And although the hotel room prices don’t fluctuate too much they can become full – so lock down your favourite accommodation in advance.

Cool Things to Do in Rome in August

Concerts in Rome in August

From small gigs to outdoor bands, Rome is buzzing in August! If you want to plan in advance, the lineups are published here for the whole year.

Events in Rome in August

August is a traditional holiday month in Rome. A lot of the locals will clear out of the city to their summer homes. So, the majority of events happening in town will be more tailored to visitors.

Madonna of the Snow – 5th August

Festa della Madonna della Neve celebrates the day it snowed in August one day in the 4th century! It prompted a couple to donate their legacy to the foundation of the Santa Maria Maggiore Church.

Whilst the rest of Rome clears out, the Ferragosto holidays still maintain a party vibe. For those who remain in the city there are little music and dance parties all around town.

This celebration is in the form of a local market. Usually running from June through August, the name literally means “Along the Tiber”. Street food, musicians, artists and a party atmosphere abound here.

Festivals in Rome in August

Look out for pop up events such as jazz in the square, seafood festivals, art displays and much more. Check local guides or the tourist office for ideas.

Swimming in Rome in August

Rome is not all city stuff! Take some time out and go for a swim.

For a posh vibe try Club Lanciani – entry costs €20 and includes your deckchairs and an umbrella. For a more laid back place, you can get a day entry into the Circolo Valentini. Both are tennis clubs, and you can relax away the day.

Visiting the Beach in Rome in August

Ostia beach is the nearest to the city. Take the train to Lido Centro and then walk on over. It is certainly the best beach for convenience. However, you may want to head to a further out beach to get clearer water – such as Fregene which is a little further north or Ladispoli.

Rome August Events – What is NOT On

Some of the usual attractions and events in Rome – such as football matches , exhibitions and trade fairs – are scaled right back during the month of August. Don’t come to Rome in August for these events. Instead, get outside and explore the city, it’s restaurants and its museums, all of these will be open!

What is Closed in Rome in August – Avoid any Unpleasant Surprise

You may find more local shop closures – especially around the Ferragosto holidays. But these are more likely to be smaller stores. You will still be able to get to a supermarket. Museums and all the big hitting tourist attractions of Rome will be open as well.

Planning What to Pack for Rome in August

Pack light for Rome in August so you can bring back plenty of souvenirs! Bring only a pocket / roll-up raincoat and a couple of sweaters or shawls for the evenings. For men, shorts are acceptable, and ladies may wish to bring some floaty dresses to keep cool.

Do not go without:

Travelling with kids can be tough in the heat. Plan ahead to make sure you don’t all end up tired and frustrated.

Courgettes, Aubergines, Tomatoes, Peppers will feature heavily on local menus. And to keep it fresh, treat yourself to a slice of melon or watermelon! And of course – gelato gelato gelato!

Given the warm temperatures, when dining in the evening in Rome you must try an outdoor restaurant. But for lunch, you may prefer a more shaded spot. Here’s a mix of the best.

Situated in a shaded courtyard you can expect Michelin Star food whilst you sit in an oasis-like environment. Check it out here.

Outside of the city, you can dine in nature on their fantastic brunch (US style) or even have them pack a picnic so you can enjoy it unders the shade of a tree.

A panoramic roof terrace coupled with amazing sunsets – not to mention the nearly 1000 strong wine list – make this restaurant a top choice for August dining.

Located in the Raphael Hotel, Terrace Bramante offers amazing food in absolutely stunning surroundings. Tripadvisor also comments to watch out for the breeze! In August, we can’t say that would be a bad thing…

Of course, one of the best experiences in Rome is simply wandering the streets. Often, you will look down what seems to be a boring alley and you will find it alive with little trattorias and bars. That’s Rome in the summer – it is sometimes best not to make dinner plans and see where you end up.

Nicest Hotels and Places to Stay

We’ve selected the best hotels in Rome with a pool for the summer! There is nothing like taking a dip after a long hot day on the town!

Is Rome weather humid or dry in August?

Rome tends to be humid throughout August. And hot. Bring a fan or some cooling mist to keep you cool.

What is the weather like in Rome in late August?

In late August you are still likely to have very good weather, with temperatures still getting over 30 degrees although it begins to cool down as you approach September. Bring a light jumper or shawl for the ladies in case it gets breezy at night time.

Rome in August is mainly full of tourists! If you have already done the main attractions then you may find the rest of the city pleasantly empty! Watch out for local closures, but this is most likely to be more related to local stores.

How hot does it get in Rome in August?

The temperatures in Rome in August will be around 30 degrees celsius during the day, or more. Make sure you have enough sun gear to stay safe.

Is the Pope in Rome in August?

You may be in luck. Whilst the popes have traditionally vacationed in summer homes in August, the current pope has stayed around.

Is Rome too busy in August?

A combination of European school holidays and cruise ship activity means that the big hitting Rome attractions can be crowded in August. But the rest of the city may be surprisingly light on crowds as the locals clear off to the beach or the mountains.

One of our top tips for Rome in August – now that you know the low down – is to book skip the line tickets if you are visiting the Vatican or Colosseum. Find out how to do that here.

Make sure you also consider pre-booking things like the Borghese Gallery in advance in case they get really busy. And, try going to the main attraction very early or later (like after 4pm). This is when the tour buses usually leave and the cruise passengers head back to the boat.