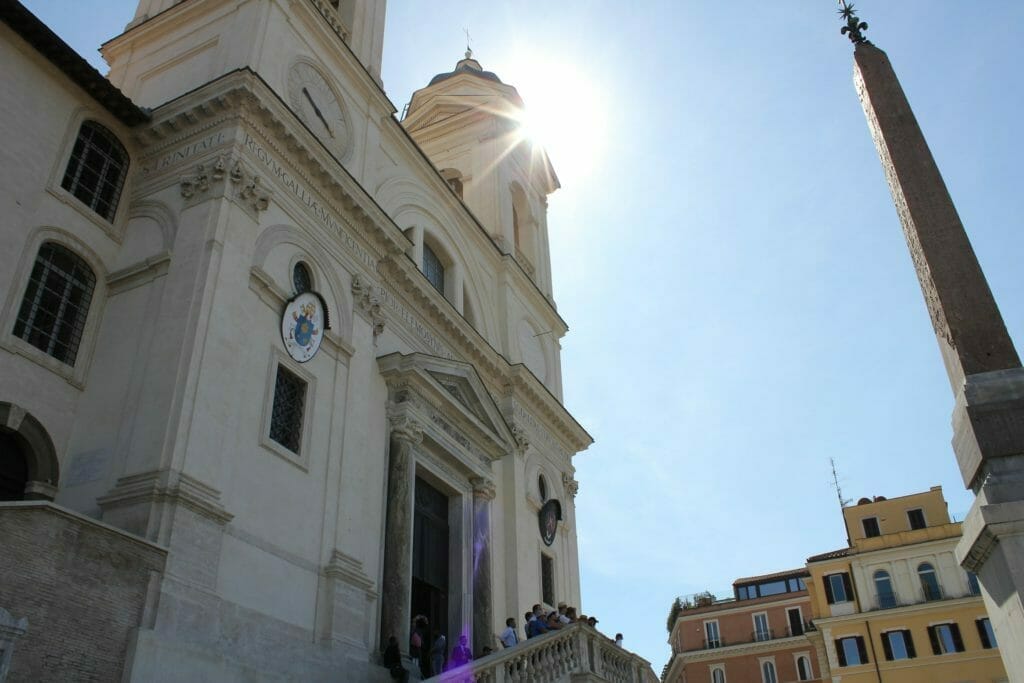 Rome, as we well know, has hundreds of amazing historical and cultural attractions. From beautiful piazzas to ancient ruins, museums and art galleries, there is something to keep even the most discerning traveller entertained. On top of that, there are literally dozens of amazing churches in Rome just waiting to be explored!

Often touted as the spiritual home of the Roman Catholic church, Rome (and we will include the separate Vatican City here) has been the seat of Catholic Christianity since the first century AD. However, even before that, Rome had many deities such as Romulus, Remus, Jupiter and Mars.

The arrival of Christianity and the establishment of the position of the Pope as an important leader meant that Rome grew in religious importance within the Christian world.  Christianity was declared the official religion of Rome by Emperor Theodosius in 380AD. Thus began centuries of religious architecture and construction, with awe-inspiring churches in Rome proudly on show to this day.

Number of churches in Rome

How many churches in Rome are there exactly? Records show over 900 churches in Rome! How on earth are you supposed to decide which ones to visit! On top of that, if you count little chapels or other places of worship, the number of churches in Rome reaches over 1500! We will help you prioritise your visits, so you can take in the most famous churches in Rome, as well as the oldest church in Rome and many more.

Free guide of Rome on your mobile

The oldest church in Rome

Dozens of ancient churches jostle for the position of the oldest church in Rome. The oldest public church in Rome is the beautiful St John Lateran Basilica. In fact, it is actually the most ancient Basilica in the west! Built in the early 4th century AD, the church has survived fires, raiders and earthquakes. Subsequently restored in the 15th century and again in the centuries thereafter, it is now remains the seat of the Pope. It is therefore more important than St Peters’ Basilica. You can now explore the beautiful nave and take in the stunning sculptures for free.

The most famous church in Rome

Hands down, St Peters’ Basilica wins the title of the most famous church in Rome.   Dedicated to Rome’s first Bishop – aka the Pope, St Peter’s attracts thousands of tourists who queue to see the stunning interior. Michelangelo’s magnificent dome is one of the top attractions here, as is the statue of St Peter.

We have already mentioned it above, but the stunning St Peter’s Basilica truly is one of the best churches in Rome, so it deserves its’ own description! There has been a church on the site since the 4th century; however the present building was completed in the 17th century.

Rumoured to be the burial place of St Peter, the Basilica has been a common burial spot for Popes throughout the ages.  We have much more information available over at our St Peter’s Guide, so make sure to check it out.

2 – St Paul’s Outside the Walls

Along with St Peters’ and St John the Lateran, St Paul’s Outside the Walls is one of the four important Roman Basilicas. It is actually not located within the Vatican, although it does belong to it.

It is one of the best churches in Rome to visit. Rumoured to be built on the resting place of St Paul, the cathedral was extensively refurbished after a fire in the 19th century, but remains true to its original character. Of particular note is the beautiful cloister.

The 4th century Basilica of Saint John and Paul is a peaceful place to explore. Interestingly, some ancient Roman rooms were uncovered under the naves. Here, visitors can see the beautiful and well-preserved frescoes of the martyrdom of the two Roman Soldiers St Paul and St John.

Santa Maria in Trastevere is one of a number of churches in Rome that claims to be one of the oldest. This 4th century beauty is a great place to visit for those who love mosaics – it boasts a number of beautiful 12th and 13th century pieces. The exterior of the church in particular has a stunning mosaic of the Virgin Mary.

Another one of Rome’s churches claiming to exist from the fourth is the Basilica di Santa Croce in Gerusalemme. Interestingly, the Basilica gets its name from its original construction, which was built with soil physically brought from Jerusalem. The Basilica has a baroque construction added later and some beautiful frescoes.

6 – Pantheon – Basilica of St. Mary and the Martyrs

Formerly a place of pagan worship to many gods, the Pantheon was dedicated and renamed to the Basilica of St. Mary and the Martyrs in the 7th century. The Martyrs refers to a large number of sacred bones that were removed from the catacombs and brought here once the church became Christian.

In English, Santa Maria in Aracoeli means Santa Maria of the Altar in Heaven. The church was founded in the 6th century and boasts a number of stunning frescoes, including Cavallini’s Madonna and Child. The gold ceiling was added in the 16th century as a celebration of thanks for victory over the Ottomans at the Battle of Lepanto. Climb over 120 steps to get there if you dare!

8 – The Basilica of Santa Maria Maggiore

Legend has it that a childless couple were driven to donate their earthly possessions to the Virgin Mary and asked for a sign. One day, it snowed on the site of the Santa Maria Maggiore Basilica, and so it was built! There is however no historical evidence to suggest this, but it is a nice story! The exterior was completed in the 18th century; however there are many different styles and architectures in the building.

If you want to discover Rome Monti District with a Churches walking tour, here is a great 2-hours guided tour.

We have mentioned this famous church already, but it deserves its’ own spot in the top churches in Rome. It is indeed Rome’s oldest church, dating back to the 4th century. It is known to be one of the most stunning Basilicas in Rome, so it is definitely worth checking out.

Another Santa Maria here – this time the Santa Maria dell’Anima in Rome. This interesting 14th century church is special in that it is German speaking! This stems from the fact that it used to be a German hospice before it was a church. Restored in the mid-19th century, the church is known for its stunning fresco of Jesus and family.

Check out this handy map of churches in Rome!

Here are even more of the best Churches in Rome that are worth the trip!

The Basilica of San Clemente

Chiesa del Gesù in Rome (Church of Jesus in English)

Conclusion to the Best Churches in Rome

This surely is enough to keep you occupied during your visit to Rome. The best thing about visiting Rome’s stunning churches is that they are mostly free to enter! However, do look at some of the ticket packages on offer, such as skip the line or group tours to make the most of your trip!