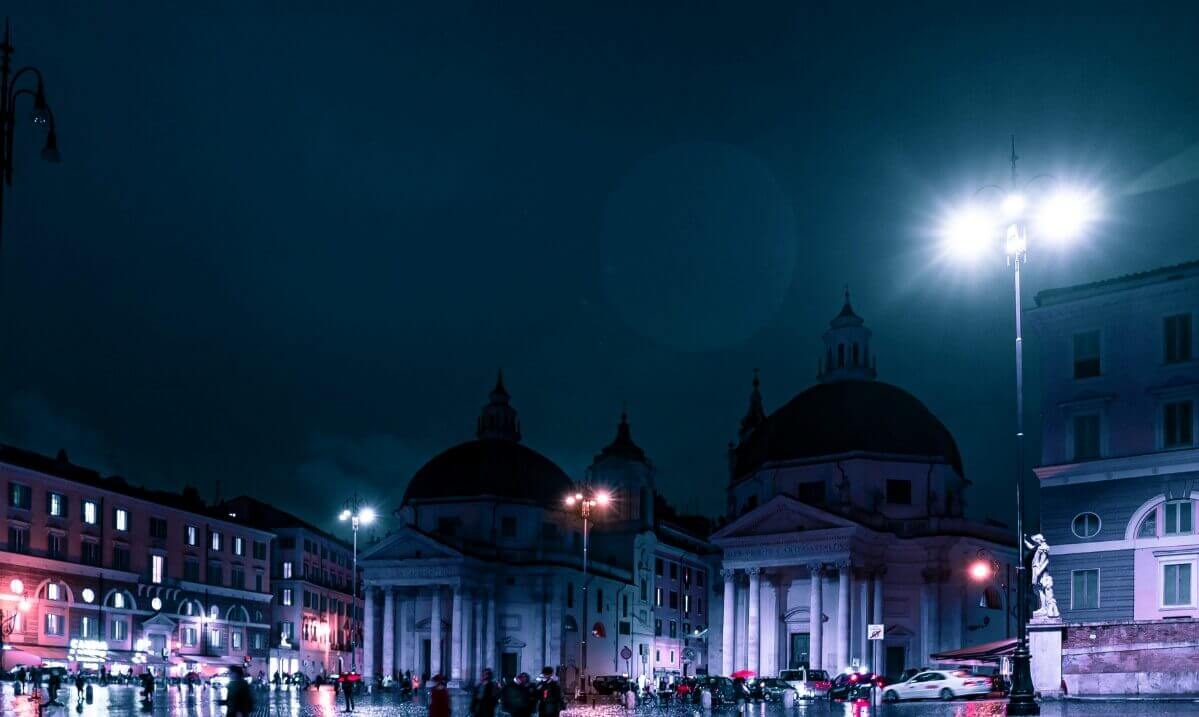 Italy in winter? Is it possible? Will things be open? Will the holiday vibe still be there? Won’t it be too cold? Here, we will answer all the questions you have about the weather in Rome in December, what to do, and much more.

We may be biased (because we love Rome year round) but we think it’s a great idea to visit Rome in December! Here’s a few reasons why:

Weather in Rome in December 2022

So what can we expect from the weather in Rome, Italy in December? Well, it’s not as bad as it sounds. Sure, you need to be wrapped up warm.

The average temperature in Rome in December starts the month at about 10 degrees, and finishes at about 7. That is fresh jumper and jacket weather. However, it rarely dips below zero (have you ever been in Paris in December? Its BALTIC).

Checking the weather in Rome in December? Watch out for the number of sunny hours. You can still expect to have up to 6 hours of sun. That’s great for exploring. And taking some pictures of Rome.

Let’s take a look at what December 2022 might look like. We’ll use the past 2 years for comparison.

December 2019 had 17 clear sky days! And the remainder were cloudy – rain was only reported on 2 days. On top of that, 2 days at the beginning of the month saw 16 degrees. That’s pretty comfortable. By the end of the month however, temperatures had dropped to 3 degrees.

December 2018 had a whopping 27 days of clear blue skies! And there was only one day of rain. That's brilliant. So, in short, we can expect pretty good odds of getting a few beautiful but cold days amongst Rome weather in December.

Check out Rome on your mobile with this FREE Guide

Rome in December by night

If the weather in Rome Italy in December doesn’t put you off, you may start thinking about the daylight hours.

How many outdoor attractions can you fit in when it gets dark early?

Well, you’ll need to plan on the light fading by around 4.30 pm. Make sure you fit in the outdoor attractions before then.

Now you know about the weather, you’ll already have a good idea about what to pack.

Planning flights to Rome in December

Book at least 3 weeks in advance when planning your trip to Rome in order to get the best deals.

It will be more expensive to travel on New Years Eve, Christmas Eve, or Christmas Day. But trips to Rome in December at the beginning of the month are likely to be very reasonably priced.

What to do in Rome Italy in December 2022

The normal attractions are all available for you at this time of year – without the crowds. So, the Colosseum, Roman Forum, treasures of the Vatican City, wonderful museums – they’re all there.

To find out what you want to see, check out our top things to do in Rome. Here, we’ll focus only on things you can only do in December in Rome. And the best thing is, they are all free!

Rome best places in December your kids will adore

Let’s not forget the kiddies. There is a lot to do for them to.

This fun museum runs a number of festive events at Christmas including winter themed workshops and interactive exhibitions.

Telling the history of Rome through chocolate, this exhibition in the oldest chocolate factory in Rome is a fab place for the kids.

Events in Rome in December 2022

So Corona might have put a bit of a downer on some of the events. Concerts in Rome in December may be on hold. But don’t worry – as of October 2022 there are still plenty of other events planned.

Christmas Markets – In Piazza Navona you’ll have a traditional Christmas Market alongside fun amusements and stalls. Other markets in Rome which are worth visiting at Christmas include the traditional set up at Piazza Mazzini or the market at the Auditorium (which also boasts an ice rink).

On 7th December, the inauguration of the Nativity Scene in St Peter’s Square takes place. On Christmas Eve, there’s a lesser known mass in the Pantheon.

Oh, and Christmas Day? That’s the ultimate mass of masses. Led by the Pope in St Peter’s Square, it’s the top of any Christmas experience in Rome.

An ancient Roman festival that was celebrated in December – Saturnalia

Hey, while we’re talking December in Rome – let’s learn a bit about history. Because there were pre-Christian celebrations in December long before the twinkly lights we know and love today. Saturnalia – a celebration of the Pagan god Saturn.

Saturn was the god of Agriculture. It used to be a festival that lasted over a week. Feasting, dancing and giving gifts were common during this time.

Some of the traditions of Saturnalia were carried over to Christmas – including the Roman tradition of gifting candles.

Celebrating Christmas in Rome in December 2022

If you are in Rome over the Christmas period, make sure you head to a midnight mass on Christmas Eve. It’s tradition.

Also, historically, Christmas Eve was a day of fasting, when families would abstain from large amounts of food. In the evening they would enjoy a simple meal usually of fish.

On Christmas day, you may find most establishments open. Treat yourself to Christmas Dinner in a local hotel. The locals traditionally don’t eat a huge Christmas Day meal.

Don’t limit yourself to Rome if you don’t have to! The off season is a great time to explore other Italian attractions that get crowded in summer.

Cheap holidays to Rome in December

Pick up cheap flights to Rome and cheap hotels by travelling in the off season. The cheapest way to secure cheap accommodation is perhaps an Airbnb in Rome.

We also find really cheap deals for hotels by just waiting until the day before to book. But for flights, it’s best to book 3 or 4 weeks in advance.

Speaking of hotels, I know exactly what I would want when staying in Rome in December. Cosy common spaces, extravagant Christmas decor, cinnamon treats, hot chocolate. But I digress.

Here’s a few of our favourite Rome hotels at Christmas:

Best restaurants you can find

What about dinner then? What places are serving seasonal food? Well, here’s a small taste of where to eat in December in Rome.

If you are planning a seasonal break and are stuck for where to go, Rome is a really good bet! And whilst we have covered some Christmassy things to do in Rome here, don’t forget to head to our other guides for even more details on activities.

Please let us know if you were lucky to get blue skies like in 2018 during your stay!

Is it cold in Rome in December?

Rome can get pretty cold - down to 2 or 3 degrees celsius. But, it is rarely below freezing. Bring a hat and warm coat just in case.

What time does it get dark in Rome in December?

What to do in Rome Italy in December?

You can do everything in Rome in December! The museums will be much more relaxing without the massive crowds, and you’ll still be able to enjoy cafe culture.

Rome is beautiful in December. Sure, the vibe is different. But the Christmas lights, nativity scenes and little markets make for a fabulous experience.

Is Rome busy in December?

With the high season ending in October and November already seeing lower visitor numbers, December is pleasantly uncrowded in Rome.

What's the temperature in Rome in December?

Expect temperatures at around 10 degrees, although they can get as low as 2 or 3 degrees.

What to wear in Rome in December?

Layers - so you can remove some in museums and restaurants. Coat, hat, gloves.

Does it rain in Rome in December?

There is a chance of rain at least on a couple of days in Rome in December.

Does it snow in Rome in December?

It has snowed in Rome in December before - but it is extremely rare. In the years where it does snow in Rome, it is more likely to fall in the new year.

How to dress in Rome in December?

Make sure to bring layers so you are able to remove or add as necessary. A warm raincoat, umbrella and warm socks/boots.

What to pack for Rome in December?

Bring your winter clothes to Rome in December, including a hat. You don’t want to ruin a Christmas lights experience because your ears are too cold to stand outside.